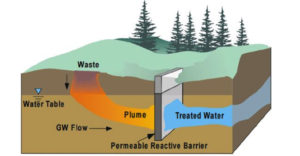 Groundwater containment systems are often needed to prevent, or significantly reduce, the migration of contaminants in soils or ground water. Physical barriers and pump and treat systems are conventional technologies that play a significant role in managing the migration of dense nonaqueous phase liquids through the soil matrix and then leaching into the groundwater. Groundwater containment becomes necessary whenever contaminated soils, sediment, bedrock or sludge, are to be buried or left in place at a site. Both the physical barrier and hydraulic systems are commonly applied as a remedy to contaminant source areas when economic, technical, or site-specific factors make it impractical to address the contaminated areas in any other way. In general, containment is performed when extensive subsurface contamination at a site precludes excavation and removal of wastes because of potential hazards, unrealistic cost, or a lack of adequate treatment technologies.

Hydraulic containment (pump and treat) is often performed when dealing with groudwater contamination and relies on pumping the contaminated groundwater to the surface using a series of extraction wells, treating it at the surface to remove the contaminants, and then either reinjecting the water underground or disposing of it off site.  Hydraulic containment systems are used: a) to control the movement of contaminated ground water, preventing the continued expansion of the contaminated zone; b) to reduce the dissolved contaminant concentrations in ground water sufficiently that the aquifer meets the cleanup goals. 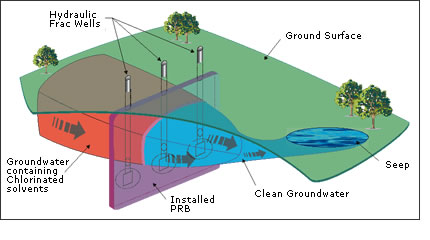