Site grading is the process of adjusting the slope and elevation of the soil around a home or building. It is accomplished with both large machines, such as bulldozers, pans, and dump trucks, and men wielding rakes and shovels.  A good design integrates the natural land forms of the site with the proposed program to create an aesthetically pleasing, yet functional and cost-effective site plan.  Because a grading scheme must consider function and utility, as well as aesthetics, it is both a science and an art.

The grading of a site serves three basic purposes:

1. Grading re-forms the land surface to make it compatible with the intended land use. 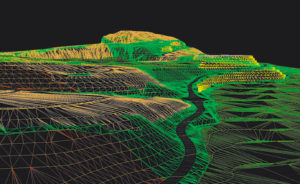 Subsequently, the relative elevations and gradients of streets, buildings, parking areas, and pedestrian/vehicle accesses must be mutually compatible if they are to function as a system. Similarly, they must be compatible with the surrounding existing terrain.

The grading design should allow for the efficient collection, conveyance, and detention of storm water run off.

3. Grading helps define the character and aesthetics of the site.

Site design is the foundation upon which many other elements of development depend. Site grading should be appealing to the user and responsive to the opportunities and restraints offered by the site. In this way, property values are enhanced and good site design contributes to the success of a land development project.

In addition to site grading Groundforce

routinely performs all phases of conventional excavation. Groundforce provides these services to Residential, Commercial and Government Agencies as well as to General Contractors and Construction Management Companies.